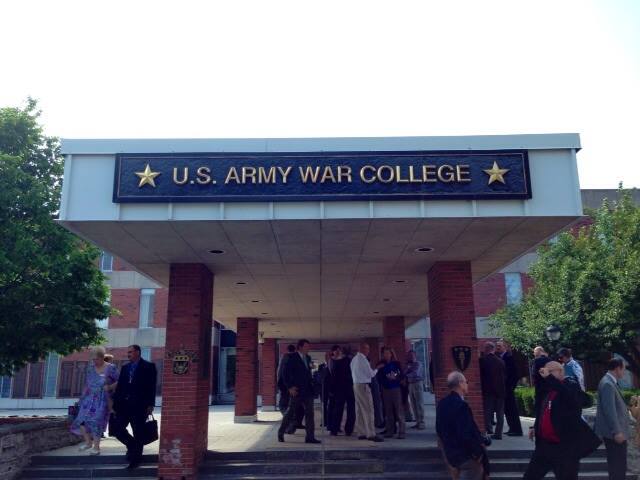 I joined approximately 160 other civilians from across the U.S. and some internationally, as New Members of the U.S. Army War College.

We were each assigned a Student Sponsor, and I felt mine was a perfect match! Miriam and I felt we knew each other pretty well from our email conversations prior, but bonded even more during the week. She was one of the few Civilian Students, but she had served in the Army previously, and her next assignment is at the Pentagon.

My Student Sponsor, Miriam and I

Seminar 25 – during one of our discussions.

Throughout the week we had Seminar discussions. In total there were 25 Seminar groups, made up of students and civilians. I may be a little biased, but our Seminar 25 group was the best! The dialogue was honest, raw, engaging, and thought provoking. There was also enough humor to make it light when needed. Our Seminar has mostly Colonels, a Coast Guard Commander, Lt Colonels, and 4 International Fellows (also students). They were all very welcoming of us joining their Seminar during their final week, which undoubtedly was very busy with Graduation that Friday, and preparing to move off campus to back home, or to their next assignment.

Even with all that they graciously had the New Members join their final BBQ get together that first evening. It was so nice to meet their family members, and to learn more about each of them on a one-to-one basis.

In the main lecture hall we heard the Keynote by General Barry McCaffrey (Ret) on The Role of U.S. Power in the World, a Panel Discussion with War College Professors on Geopolitical Challenges, optional Lectures by War College Professors on a variety of topics. I chose Transnational Crime in the Americas, by Dr. Paul Kan. Dr. Kan is very impressive, and gave a great presentation, even with disturbing but important information.  Our final morning we heard from Dr. Peter Singer on Cyber Crimes. I found it very fascinating, but discovered a group of gentleman on the bus were confused by it. It tells me there needs to be more education in the work place regarding this topic. After each session we would go back to our Seminar groups and discuss what we had heard.

We had a field trip to Gettysburg one of the days, and we were deep in the heart of the battlefield, rich with history. I admit I was not the best History student, but to hear the very animated stories as told by our Historian guide, my interest was piqued. We could envision the soldiers he spoke of, and the trials and tribulations so many went thru in a short amount of time.

Finishing off the week was a Reception at the Commandant’s Quarters. It was a beautiful evening for it, and the house and grounds were lovely. Miriam introduced me to the Commandant, Major General Anthony Cucolo, III. We had a very nice chat and I was thrilled he is a huge proponent of the War College using Social Media! Pictured with me is MG Cucolo, and Jack Nicklaus, II, who was in my Seminar group.

During our final discussions in our Seminars the New Members were presented with Certificates and we got “coined”. If you are in the military, or know someone who is, you know this is a great honor. My first words were “My military daughter is going to be so jealous, but also proud!”

This was truly a once in a lifetime experience, and I’m happy to have made connections with many in my Seminar group so we can keep in touch going forward!

The Top 5 things I learned or got reminded of:

Recently a client of mine from Twitter had an issue with a Dell computer purchase. …

With the recent changes rolled out to everyone by Facebook, and the even more recent…

The Evolution of Social Networking Nanny to REH Media

The Evolution of Social Networking Nanny to REH Media Why the change? Why now? Let’s…